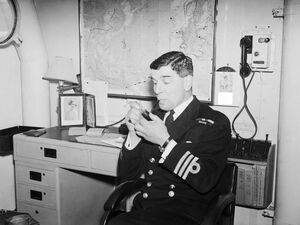 Commander Richard Frederick Jessel, DSO, OBE, DSC & bar was an English officer of the Royal Navy who served during the Second World War.

He was born on 24 November 1902, the son of lawyer and Jewish communal leader Albert Henry and Ellinor Jessel (née Raphael). Jessel entered the Royal Navy in 1916, and served on a variety of vessels, including a period of secondment to the New Zealand Division from 1927[1][2]

His commands included the destroyers Sabre and Vanoc,[3] and in 1936 he was posted to the newly-commissioned Glowworm. It was while in command of Glowworm that he escorted King Edward VIII's yacht Nahlin on a royal tour of Greece. The tour itself proved tumultuous for Jessel. While bathing at Itea, his career almost came to an end when he sustained severe leg injuries after being struck by the propeller of the King's motorlaunch.[2][4]

Deemed unfit for a sea assignment, Jessel spent much of the remainder of his pre-war career training cadets aboard ships such as Frobisher and Erebus.[2][5] That remained the case until July 1939, when he joined the battlecruiser Hood. Fortuitously, Jessel left the ill-fated battlecruiser for the new destroyer Legion in late 1940.[6]

His two-year tenure with Legion was eventful, and earned him a number of decorations. In March, his ship provided support to the commando raid on the Lofoten Islands in northern Norway. The subsequent months found Legion on escort duty, although this was punctuated by the rescue of 283 survivors from the merchant cruiser Rajputana and the hunt for the German battleship Bismarck.[7][8]

In September 1941, Legion was transferred to the Mediterranean to support the Malta Convoys. His ship had an immediate impact, taking part in the sinking of the Italian submarine Adua, for which Jessel was awarded the Distinguished Service Cross.[2][7] Further rescues were made in October and November of the crews of Cossack and the aircraft carrier Ark Royal. The carrier had been torpedoed while returning from a Malta convoy and was listing heavily. In a difficult manoeuvre, Jessel negotiated Legion close to the carrier's port side and evacuated more than 1500 crew, many of whom jumped onto hammocks placed on Legion's foredeck.[9] His efforts elicited a mention in despatches, the first of three MiDs awarded to Jessel.[2]

Jessel was awarded a DSO and bar to his DSC for his actions in two engagements with Italian warships in December and March 1942, respectively. Legion's end came soon after the second engagement, the Second Battle of Sirte, when Italian aircraft damaged the destroyer with bombs. Legion was able to reach Malta, but was bombed again and sunk while docked in Grand Harbour.[7] Although he had suffered a broken leg, Jessel remained on board until his crew had been evacuated.[2]

He was invalided home, but the ship transporting him ran aground off North Africa after being attacked by German bombers. He was taken prisoner by the Vichy French, and incarcerated at Laghouat camp. There he remained as the senior Allied officer until being released in November following the Allied invasion of Algeria.[2] Jessel resumed active duty in January 1943 as commanding officer of the training establishment King Alfred. In October, he took command of the 16th Destroyer Flotilla, with his flag in the Admiralty-type Mackay.[6]

His final command was the Zealous, which would escort a number of minelaying operations and two Arctic convoys before the war's end. It was while escorting Convoy JW64 in February 1945 that Zealous was tasked with three other destroyers to evacuate Norwegians from Sørøya who were evading German forces.[10] Conducted at the request of the Norwegian High Command, the four ships evacuated at least 500 people and steamed away at full speed to avoid a possible engagement.[11] Jessel's contribution was recognised in 1946 when he was made a Knight, First Class of the Order of St. Olav.[2]

After the war, he joined the directing staff at the Royal Naval College, Greenwich.[2] Although retiring in 1952, Jessel was loaned to the Indian Navy at the request of Lord Louis Mountbatten. For three years, he taught naval strategy and tactics at the Joint Services Staff College, Wellington. His contributions were praised after his death by Vice-Admiral R.K.S Gandhi, who remarked that he had 'gave so much to the Indian Navy'.[12]

He married Winifred Levy in 1927. One of their children, Toby, became a Conservative member of parliament. Jessel died on 14 February 1988.

Community content is available under CC-BY-SA unless otherwise noted.
Advertisement